Johnson is facing a battle to save his premiership after the report published on Wednesday by senior civil servant Sue Gray criticized a culture of rule-breaking events, and revealed new photographs of him at two separate gatherings.

Gray wrote that “the senior leadership at the centre” of Johnson’s administration “must bear responsibility” for a culture that allowed the parties to take place.

She added there is “no excuse for some of the behaviour” she investigated, which included “excessive alcohol consumption.” Logs of email exchanges were also featured, including some where staff openly discussed hiding their partying from the media.

The report probed 16 events that took place while the UK was living under strict Covid-19 restrictions.

A picture of Johnson raising a can of beer at a birthday party thrown in his honor was included in the dossier, alongside more images of the Prime Minister at another event. 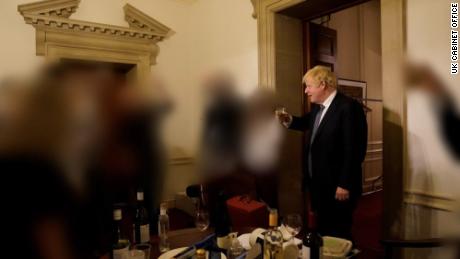 Speaking in Parliament moments after the report was published, Johnson said he was “humbled” and has “learned my lesson,” adding: “I take full responsibility for everything that took place on my watch.”

But he also repeated previous claims that parties only escalated after he left, and insisted he was “surprised and disappointed” that several drink-fueled events took place.

And he suggested that the cramped quarters of the government buildings and the “extremely long hours” of his staff responding to the Covid-19 crisis could explain why several parties and social events took place.

“I briefly attended such gatherings to thank them for their service, which I believe is one of the essential duties of leadership,” Johnson said.

He fielded several interventions by lawmakers who demanded his resignation, but repeatedly rejected those calls.

The report does not entirely end the “Partygate” saga that has left Johnson’s job on a precipice. Its findings raise serious questions about whether Johnson misled lawmakers when previously denying that parties took place, and faces a separate parliamentary committee investigation into that question.

On Wednesday in Parliament he was savaged by opposition Labour Party leader Keir Starmer, who said the inquest “provides definitive proof of how those within the building treated the sacrifices of the British people with utter contempt.”

“This report will stand as a monument to the hubris and the arrogance of a government that believed it was one rule for them, and another rule for everyone else,” Starmer said.

“You cannot be a lawmaker and a law-breaker. It’s time to pack his bags.”

Gray found that Johnson attended a garden party in May 2020 for around half an hour, where approximately “30-40 people” were present.

An invitation to that event told staff about “socially distanced drinks” in the Downing Street garden, open to “whoever is in your office.”

“Could you also suggest they bring their own booze! Not sure we will have enough,” the email from Martin Reynolds, Johnson’s principal private secretary, said, according to the report. The next day, Reynolds noted the media had not reported on the party, writing to a colleague: “We seem to have got away with (it).”

In one email exchange, staff were told to avoid “walking around waving bottles of wine” while reporters were in the building, and to keep the sound down at gatherings when a Covid-19 ministerial press conference was taking place.

Before a December 2020 virtual quiz that Johnson attended part of, an official sent a message to staff relating to “drunkenness” and advised them to leave Downing Street through the back exit to avoid press photographers. 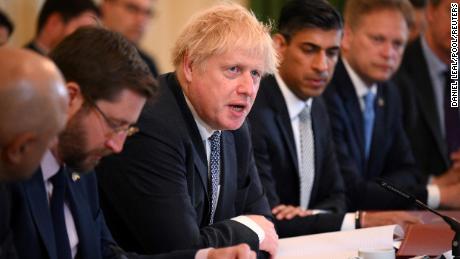 A night of heavy drinking on the eve of Prince Philip’s funeral — which took place during lockdown rules that forced the Queen to sit alone to say goodbye to her husband of nearly 74 years — resulted in a child’s swing in the Prime Minister’s garden being broken.

Staff left that event well after midnight, with the last individual leaving at 4:20 a.m.

Some staff felt uncomfortable at the behavior inside Number 10 but feared raising the issue, Gray found. And on other occasions, custodial staff were treated poorly by those involved in events.

“I was made aware of multiple examples of a lack of respect and poor treatment of security and cleaning staff. This was unacceptable,” she wrote.

And Gray hinted that Downing Street officials had been unwilling to provide information about the parties, writing: “It was also unfortunately the case that details of some events only became known to me and my team through reporting in the media. This is disappointing.”

Johnson’s time in office has been derailed by the months-long scandal dubbed “Partygate” by the British media. He initially denied any events had taken place, but 16 were subsequently investigated by Gray, 12 were probed by the police and Johnson himself was fined by officers for attending one.

Some of the lawmakers in his own Conservative party have joined opposition calls for him to resign in recent weeks, and he will now have to convince his colleagues to stand by him despite the slew of allegations and Gray’s damning inquiry.

But aside from the political ramifications, the most jarring element of Gray’s report is the stark contrast between events inside Downing Street and across the country as a whole.

Britain endured three strict lockdowns and various other regional measures during the pandemic, which claimed more lives in the UK than in any other country in Europe. 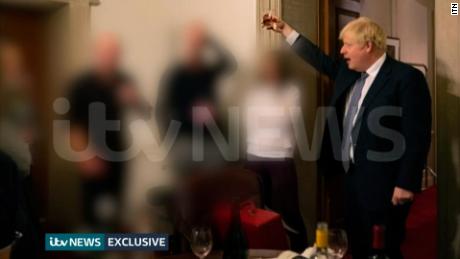 During those periods, laws limited attendance and physical contact at funerals, and kept people away from dying relatives in hospitals and care homes.

“There we have it,” the Covid-19 Bereaved Families for Justice UK said in a statement on Wednesday.

“Whilst the country had one of the highest death rates in the world from Covid-19, they were celebrating over cheese and wine and drinking themselves sick over a karaoke machine.

“The messages in the report show they knew how disrespectful they were being to the families they were failing, but that didn’t bother them,” they added.

The group urged Johnson to leave office, saying he “has treated us like they treated their cleaning staff and security who challenged their law breaking at the time: like we’re an inconvenience, like we’re dirt.”