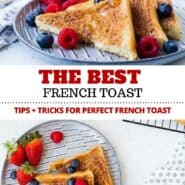 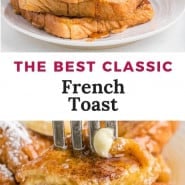 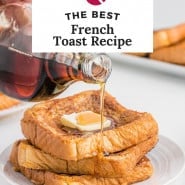 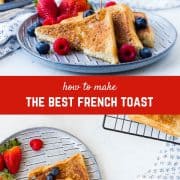 Why you’ll love it: I have a couple of tips for you that really make the difference!

Sometimes Ben makes quick French toast for the kids for breakfast on the weekends. He makes it with the whole wheat bread we always have on hand. I love that he does this for this for the kids but I always take a pass.

Do you crave perfectly made French toast? Like the kind you get in the best restaurants? I’m going to show you how it’s done. I have lots of great tips for how to make French toast perfectly and deliciously every time.

So here’s the thing about French toast. I have a few pet peeves. I’m pretty easy going in general (maybe Ben would disagree), but when it comes to French toast, things just have to be a certain way. We already talked about the bread, but we’re going to talk about some other must-haves for the best French toast ever.

Oh, and by the way, this recipe is easy! You’ll only need 6 ingredients, all of which you probably already have, except for maybe the bread. Trust me, you’ll be happy you made homemade. It’s so much better than frozen French toast from a box or plastic bag.

I’ll get you started here and give you lots of helpful tips. Look for the printable recipe card near the end of the post. It has full instructions, measurements, and nutrition information.

components of the Best French Toast (What You’ll Need)

What’s the secret to good French toast? As you can probably tell, I have strong opinions on this. Here are my tips:

Dry or stale bread is best. If your bread is fresh, just let it set out, unwrapped, for a couple of hours or even overnight.

Mix the eggs and milk thoroughly. Don’t slack here, you guys. I don’t want to see any separation of the egg whites or egg yolks in this mixture. Beat the eggs and milk until they are perfectly combined and uniform. Does it take an extra minute? Yes. Might your wrist or elbow get a little tired? Yes. You can deal. Otherwise you’re gonna end up with something that looks like a mini fried egg on the outside of your French toast, and no one wants that situation.

Put vanilla in your milk and egg mixture. It adds so much flavor. The more the better, in my opinion! Check the recipe card below for my recommended amount.

Put cinnamon and sugar on the bread before dipping it into the egg mixture. We’re not going to put cinnamon or sugar into the egg mixture. Don’t you hate it when the cinnamon clumps up and sticks to the side of the bowl instead of the bread? Instead, dust the outside of the bread with cinnamon sugar before you dip it in the eggs. It’s a genius tip that I unfortunately can’t take credit for. I learned it from Lauren when I made her Chai French Toast Skewers.

This dusting of cinnamon and sugar not only adds just the right amount of sweetness and spice to every single bite of French toast (no clumpy cinnamon here!) but it also creates an amazing caramelization on the outside of the French toast. It’s completely irresistible and a total game-changer. Try it, you’ll see what I mean!

Soak the bread in the egg mixture until it’s soft and squishy but not falling apart, about 10 to 15 seconds per side.

Cook each slice of French toast on a buttered griddle. Cook it low and slow for perfectly cooked, but not burnt French toast.

Add TOPPINGS. Go crazy.
And those are the secrets to the best French toast!

Why is stale bread better for French toast?

Let’s be clear. We’re not looking for moldy bread here. Just slightly dry. The reason dry bread makes better French toast is because it soaks up more of the egg and milk mixture than moist fresh bread would.

I didn’t dry the bread overnight, how can I dry bread quickly?

First of all, I’ve been there. It’s so hard to remember, or maybe the French toast craving just hit you in the morning! Not a problem. Preheat your oven to to 300°F, put the bread slices on a sheet pan, and bake for 10-15 minutes, or until dry, flipping once.
Make sure to cool the bread completely before dipping it into the egg mixture.

Can I make French toast without vanilla?

Yes, definitely! You can leave it out, or you could use another flavor. Almond extract, honey, maple extract, or whiskey are all fun choices!

How do you make French toast that isn’t soggy?

Perfect French toast should be crisp on the outside and custardy on the inside. A bit of butter on the griddle helps crisp up the French toast. Cooking it “low and slow” ensures that the inside gets done and the outside turns crisp and golden brown.
If you are serving a large crowd, keep the French toast warm and crisp in a low oven (200°F). Put the cooked French toast on a wire rack set on a baking sheet for good air circulation.

How long should I soak my French toast?

Make It Your Own

Leftover French toast should be stored in the refrigerator. It will keep for at least three days. It can be frozen for up to two months in a freezer safe container or bags.

To reheat single slices, whether refrigerated or frozen, the easiest way is to use your toaster or toaster oven. The toast will crisp up again and be super tasty. An air fryer works great, too. Set it at 350°F and your French toast will be ready in just a few minutes.

A microwave is okay but the French toast tends to become soggy and a bit tough.

Prevent your screen from going dark

This website provides approximate nutrition information for convenience and as a courtesy only. Nutrition data is gathered primarily from the USDA Food Composition Database, whenever available, or otherwise other online calculators.