Sylhet City, geology and packing up.

Sylhet City, geology and packing up.

Here in Bangladesh, we are combining fieldwork using magnetotellurics (MT) to examine the structure and faults below the surface in this earthquake-prone region, together with a mini-Field School of  11 U.S. and Bangladeshi students for the last 2 weeks.  Magnetotellurics uses the sun’s electromagnetic radiation to probe the subsurface.  It requires carefully recording the electric and magnetic fields with sensitive equipment.  However, we have had difficulties finding places far enough away from power lines, and had rats and foxes eating the cables.  Our solution has been to deploy in tea gardens (plantations) and to bury the cables.  Rain and flooding has also hampered our search for good sites for MT.  We have now completed our work from a base in Srimongal in southern Sylhet, so we drove north to a resort on the Sylhet anticline. 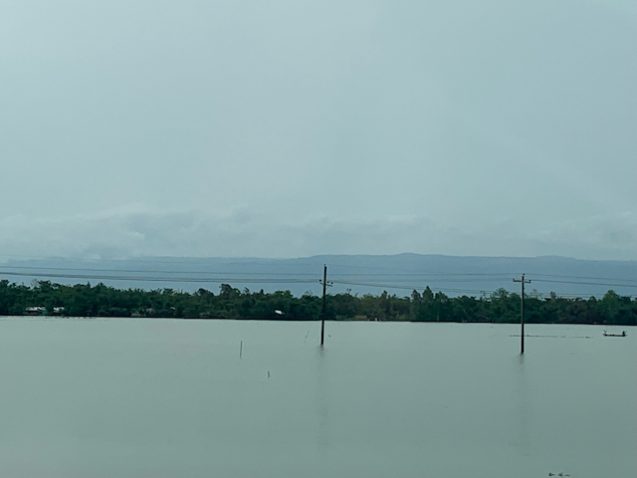 A view of the flooded fields of Sylhet with the Shillong Massif in the background. 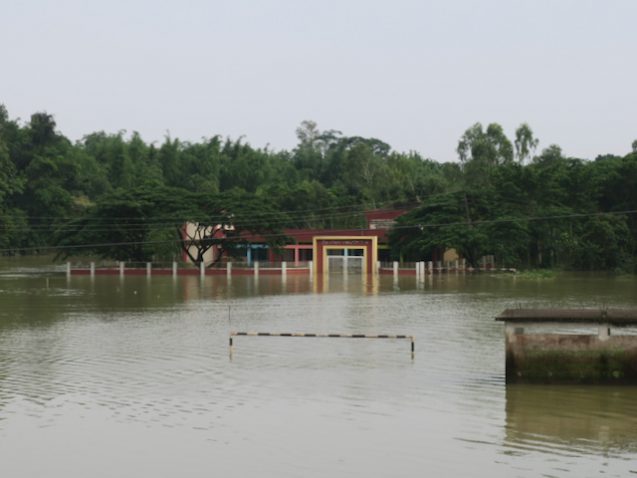 A view of a school that has been flooded by the early rains.

After settling in our hotel in the hills, a group of 4 of us went out to scout a remote area in NE Sylhet.  We hope the tea gardens there will work.  To collect MT data, we need 2 simultaneous sites, we are hoping for one of the tea gardens here on this anticline and another farther to the NE.  Heading out on the main road, we saw the extensive flooding that has already happened with early rains. Many areas are under water and we saw people collecting money to help those flooded.  Usually, rice fields are flooded, but home and roads are elevated above the normal flood level and remain dry.  Now, we can see homes and schools that are flooded even before the monsoon begins next month. Continuing on, we headed onto progressively smaller roads. As we got close to our target site, we reached dirt roads that were not passable by a van this time of year with deep muddy ruts that we could not drive through.  I had hoped the tea gardens would maintain good road access, but I was wrong.  We had to abandon the scouting and head back. 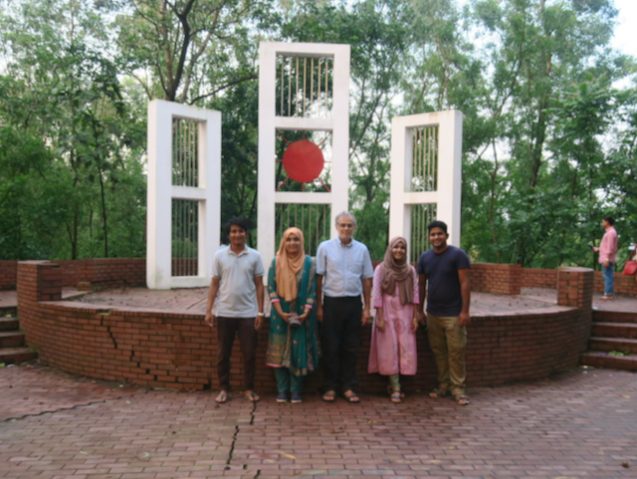 Arman, Liza, me, Fahima and Masud at the Shaheed Minar at SUST.

Since it was still relatively early, we headed to Shahjalal University of Science and Technology (SUST), Shofique’s university.  It is a little west of the city at the edge of the Sylhet anticline.  We toured the school, Shofique’s office, a GPS site (not mine), and the local Shaheed Minar on top of a hill. The Shaheed Minar is a monument to those killed during the Bengali Language Movement in 1952 when Bangladesh was still East Pakistan. It was a poignant precursor to the eventual 1971 War of Independence.  The Central Shaheed Minar is near Dhaka University, but there are local ones throughout the country. They are central to the annual Language Day celebrations, including a week long fair in Dhaka celebrating the Bangla language with plays, poetry, readings and a book fair. 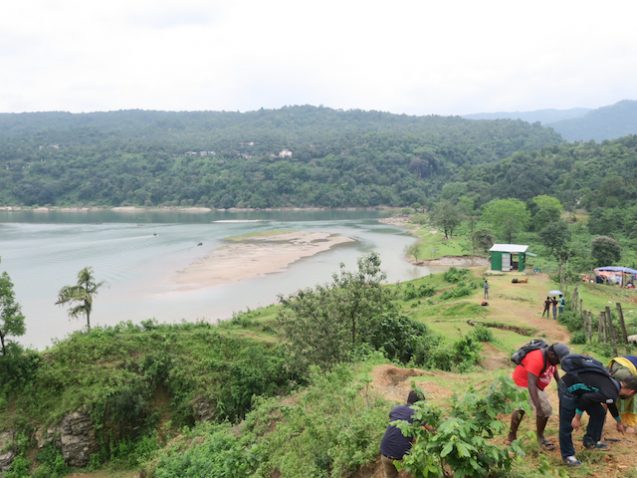 A view of where the Dawn River flows into Bangladesh from the Shillong Massif in India. A few of us are looking at an outcrop in the lower right. 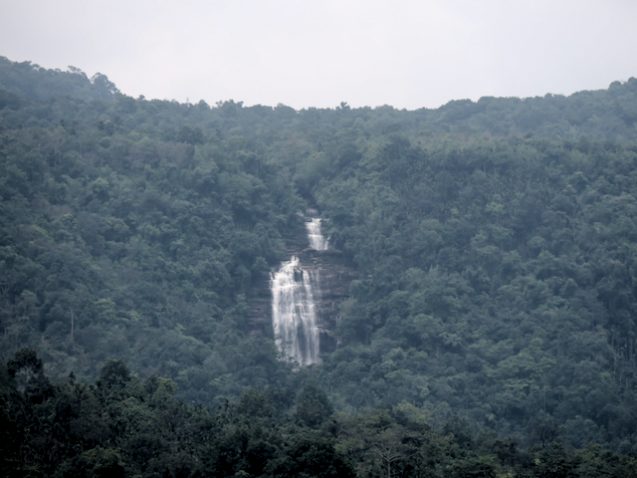 One of the waterfalls flowing down the front face of Shillong.

We were all unsatisfied with our hotel and in the morning we switched to a much nicer one in Sylhet City itself.  This was also our last day for scouting and installing any MT sites or they would not be deployed sufficiently long for our purposes.  Unfortunately, it proved to be another rainy day.  Scouting and deploying electrical equipment in the rain is never a good idea, so instead we spent the day completing most of our lectures for the mini-Field School.  Rashed Abdullah of Jahangirnagar University and I lectured in my large room.  I have the largest room of the group and it is just large enough for all of us, 10 students and 3 professors (since a few people had to leave early), to squeeze in while projecting the PowerPoints on the wall. 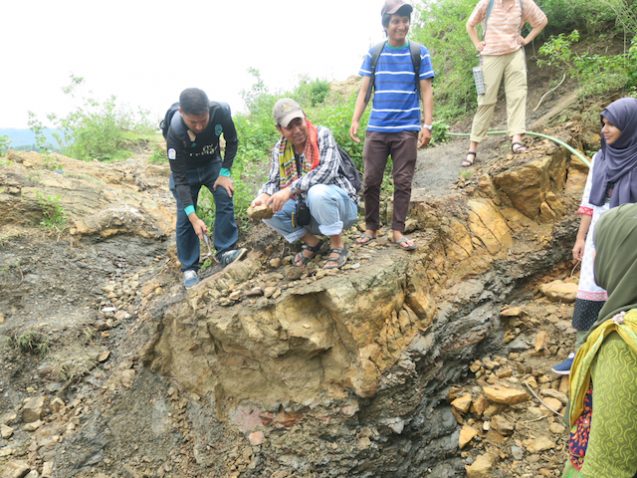 Rashed Abdullah atop the Eocene carbonates flanked by Mohibul and Arman.

Our two remaining days in the field were focused on seeing the geology, with some last lectures in the evening.  We started at Jaflong, at the Indian border with the massive 2-km high, 300-km wide Shillong Massif on the other side.  This is the Indian state of Meghalaya, which means Abode of the Clouds and it is the rainy place on earth.  The Shillong Massif is thrusting over the Sylhet Basin pushing it down.  It creates thicker sediments and many low swampy areas in northern Sylhet.  Traditionally, the Dauki Fault separating these two regions is placed at the border, the break between the mountains and the flat plains.  However, we have long suspected that this is not the main Dauki Fault ever since Nano Seeber and Ellie Ferguson mapped here some years ago.  It cannot accommodate the ~7 km of vertical motion along the fault here.  It was good to argue with some of the Bangladeshi students who have long been taught that this is the Dauki Fault. 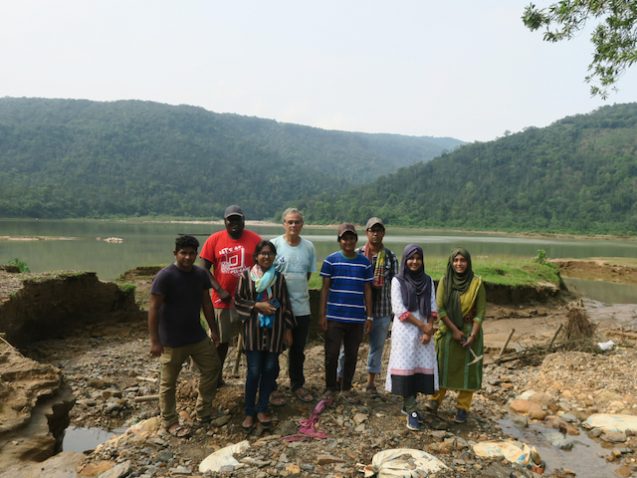 Masud, Martin, Tomalika, me, Arman, Rashed, Fahima and Liza at Tamabil. When I was last here in the winter, it was dry and filled with workers excavating rocks. 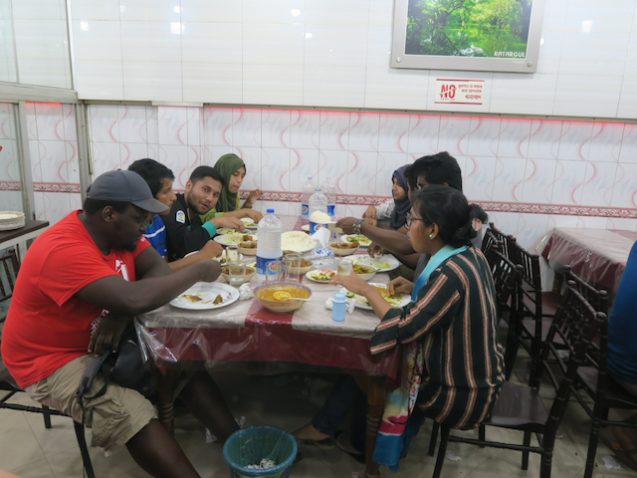 Eating lunch at a restaurant in Jaintipur.

We visited outcrops of Eocene (~50 million year old) limestones and younger shales.  This area has been built up since I was last here, with new stone steps and many tourist shops going down to the river.  Jaflong is a mixture of an industrial site mining the rocks carried down the rivers from Shillong as a source of aggregate for making concrete, and of tourism to see the steep mountains and the rivers flowing out of them.  We scrambled among the rocks and worked our way farther east stopping at outcrops at Tamabil and Jaintipur. Jaintipur is a center for the Khasia people, a matriarchal society from Shillong.  We had lunch in Jaintipur and then walked through outcrops in the surrounding area, including a government agricultural center adapting various crops for the climate of Bangladesh. 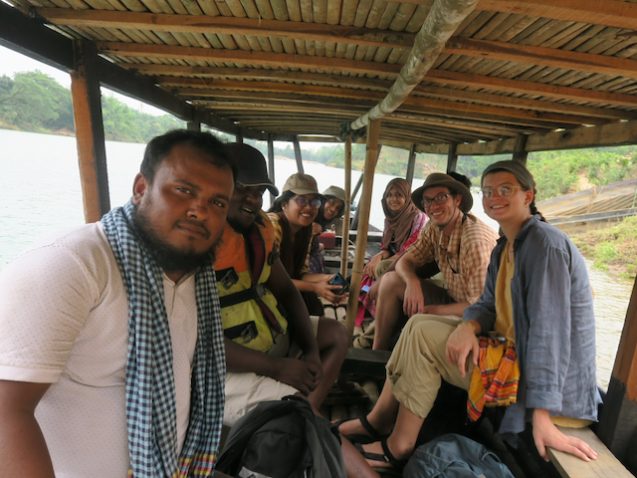 Ruven (driver), Martin, Tomalika, Liza, Fahima, Alex and Anna in our boat on the Shari River. The others are on the roof.

The next day we continued with a boat ride along the Shari River.  No trip to Bangladesh is really complete without riding on a wooden boat.  Unfortunately, many of the outcrops are underwater this time of year. We were still able to see the stratigraphy and deformation of the beds.  We also got out and walked nearly to the Indian border.  After the boat trip and some green mangos, we drove to some more outcrops, including some beds that were nearly vertical.  These reinforce our belief that the Dauki Fault is blind and extends much farther south.  The deformation we see could well be the effect of a fault below.  This interpretation will be consolidated with future research. 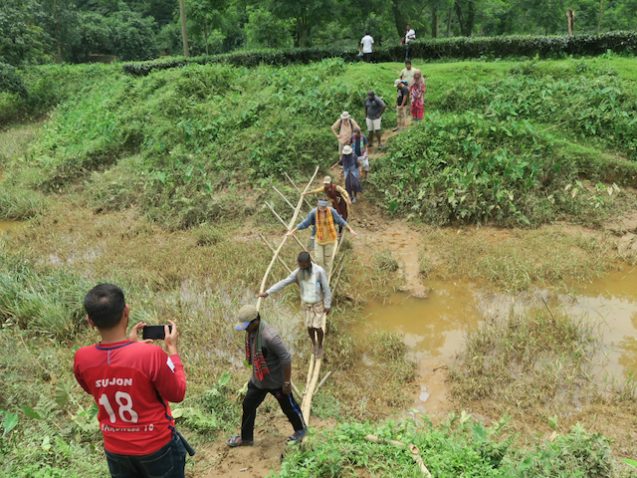 We all cautiously walk across a bamboo bridge near the Shari River. 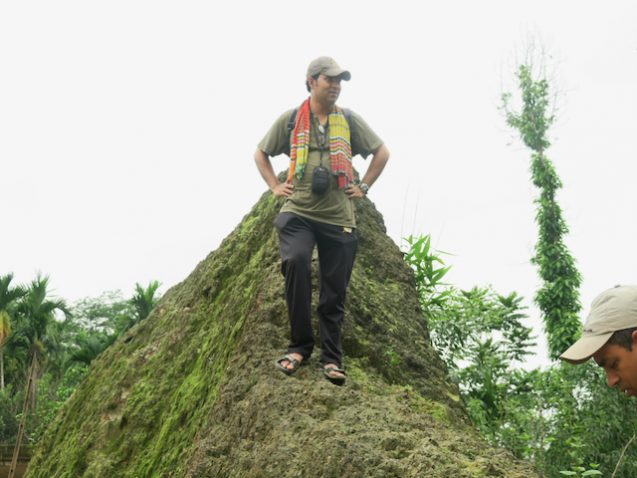 Rashed stands atop an outcrop and explains its significance.

After the outcrop geology, we visited the site of gas field where there was a blowout in 1955.  Then the relief well to stop the gas leaking out also had a blowout.  Now, gas can still be seen bubbling up through the waters at the two wells, and nearby a flame continuously burns in a small cave.  This was followed up by a visit to the Sylhet Gas Field company office.  On the way back we visited Shofique’s home and met his wife and daughters.  I thought he had just invited me, but when I saw the other cars, I realized that he had invited everyone.  We were greeted with a fantastic spread of food and fruits. And we finally got to try ripe litchis and mangos. 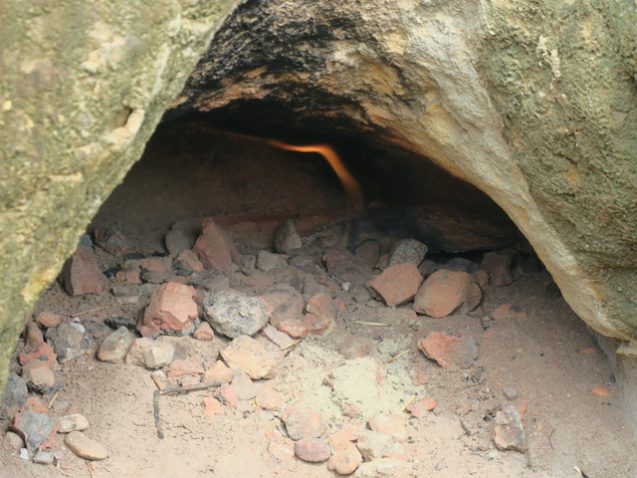 A flame continuously burns from gas leaking out of the ground since the blowout of the Sylhet-1 well. 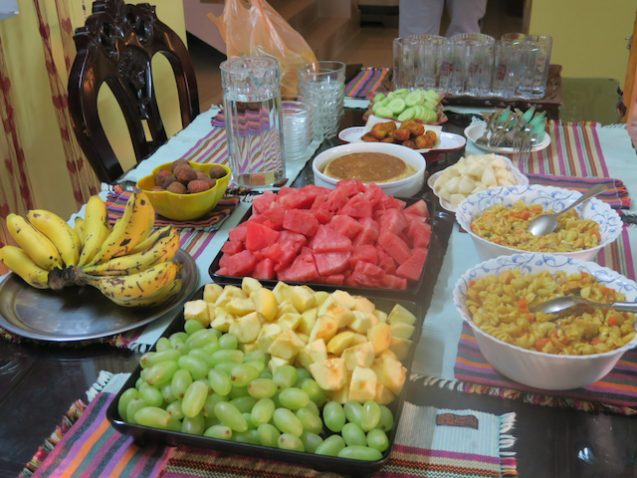 The spread of food and fruits that awaited us at Shofique’s house.

After much needed showers, we went out for a buffet final dinner at a restaurant in Sylhet City. Then we returned to our hotel for a “lungi party”, with all the men in lungis while photos of our trip flashed on the wall.  It was a nice end to the mini-Field School. The next morning was the long drive back to Dhaka.  The first stop was Bangladesh Open University (BOU) where our other equipment from the March cruise is being stored.  The original crew of Masud, Arman and Biplab and I stayed behind to pack it all up the next day for shipment to the U.S.  Everyone else headed back to Dhaka to their homes, relatives, or a hotel. 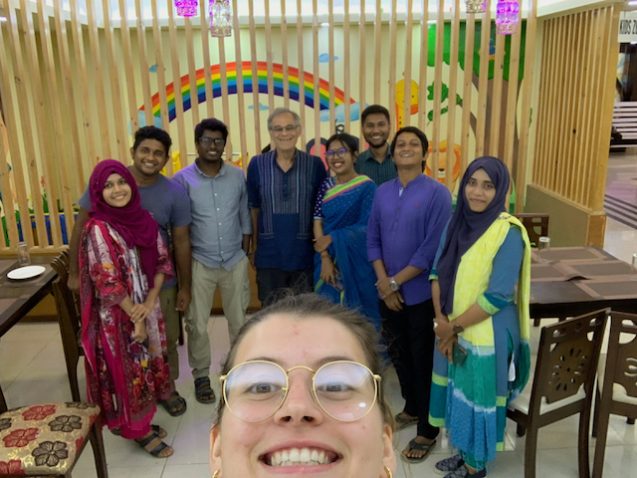 Anna takes a selfie of Fahima, Masud, Biplab, me, Tomalika, Mohibul, Arman and Liza dressed up for the final dinner buffet. 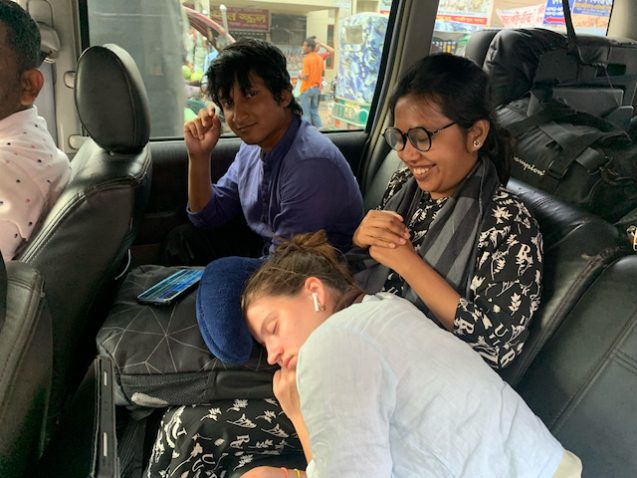 Anna asleep on tomalika’s lap with Arman looking on after the long drive from Sylhet back to Dhaka.

While the students got together in Dhaka University to show the Americans around town the next day before their flights, my crew spent the day cleaning and repacking the equipment.  After arranging the 1400 lbs. of equipment on 3 pallets, a team from a furniture factory wrapped it in plastic and then rope for shipment back to the U.S.  Then, we final few could head back to Dhaka.  I spent my last day visiting Dhaka University and attending part of a meeting about the Bangladesh Delta Plan 2100, a major initiative to create a sustainable delta over this century. Now all that was left was the long flight home. While the MT data acquisition encountered many difficulties and our acquisition plan had to be greatly scaled back, I am still hopeful that it will yield important information to complement our seismic data.  The mini-Field School, despite its loose organization dictated by the on-the-fly MT logistics was a complete success.  Both the students and I learned a lot both in the classroom and in the field thanks to the contributions of the mixture of U.S. and Bangladeshi professors. 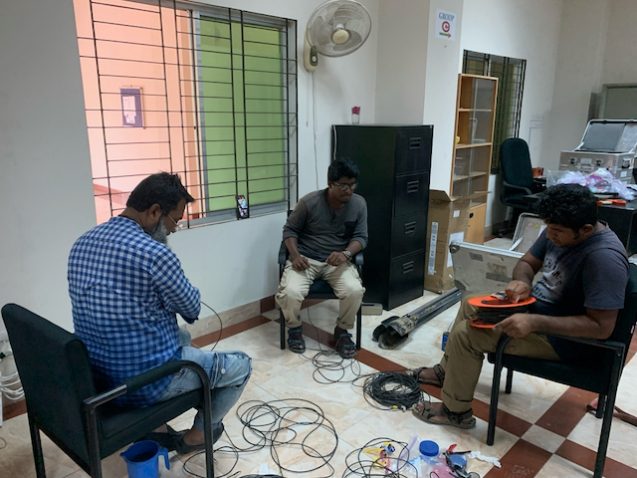 Babu, Biplab and Masud working on cleaning and organizing the equipment. 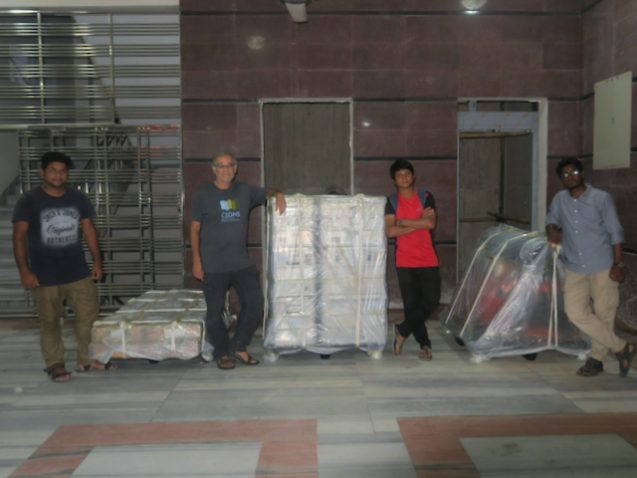 Masud, me, Arman and Biplab standing by the 3 wrapped pallets of electromagnetic gear ready to be shipped back to the U.S.